The AIDS Toto Clubs -AIDS nono in Chichewa, are participatory theatre workshops that promote Sexual and Reproductive Health amongst youth in Malawi. Implemented weekly by Theatre for a Change (TfaC), the AIDS Toto Clubs are held in primary schools across the country.

The evaluation revealed an increase in target population´s knowledge about HIV transmission, the need to use contraceptives to avoid sexually transmitted diseases and unwanted pregnancies, as well as their right to abstain from unwanted sexual relationships. In addition clear indicators showed that girls and boys that participated in the clubs had developed positive attitudes towards behavioral change objectives, such as how to behave with people living with HIV.

However, the investigation also revealed unequal impact on the target audience´s ability to develop key behaviours to deal with specific situations such as saying no to unwanted sexual relations; abilities that, following TfaC’s method, refer to use of Voice, Body and Space during personal interactions.

The investigation discovered that the unequal impact on the target population’s abilities and behaviours was due to a significant difference in teachers facilitating capacities. The main conclusions of the research offered actionable recommendations for the design and implementation of participatory tools to monitor teaching capacities, as well as the development of a constant reinforcement and support teacher training system. Our recommendations were included in the TfaC project method through participatory skill reinforcement workshops. 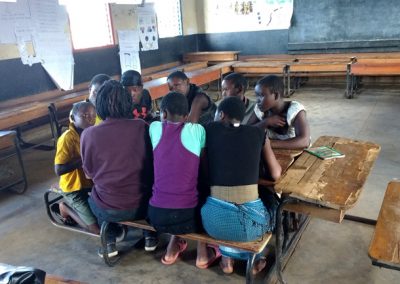 We'd love to hear from you.

This website uses cookies to improve your experience while you navigate through the website. Out of these, the cookies that are categorized as necessary are stored on your browser as they are essential for the working of basic functionalities of the website. We also use third-party cookies that help us analyze and understand how you use this website. These cookies will be stored in your browser only with your consent. You also have the option to opt-out of these cookies. But opting out of some of these cookies may affect your browsing experience.
Necessary Always Enabled
Necessary cookies are absolutely essential for the website to function properly. This category only includes cookies that ensures basic functionalities and security features of the website. These cookies do not store any personal information.
Non-necessary
Any cookies that may not be particularly necessary for the website to function and is used specifically to collect user personal data via analytics, ads, other embedded contents are termed as non-necessary cookies. It is mandatory to procure user consent prior to running these cookies on your website.
SAVE & ACCEPT